Kenmore sewing machine model 158 is a heavy-duty household machine with a built-in straight stitch zig-zag stitch and blind hem stitch it also does take decorative cams which would go on the top of the machine. This is a low shank machine so the presser feet are really easy to find because they aren’t expensive and they’re just readily available for pretty much any sewing machine.

Most of the sewing machines they have today are low shank or little stamp on kinds so they’re pretty cheap. It is double-needle capable so you can use, you can do two rows of like decorative stitching which is nice it’s a pretty basic straightforward Kenmore sewing machine model 158.

It’s not complicated to use in any sort of way but it does do a lot and it does handle a lot of different fabrics, everything from lightweight fabrics to leather. To change out your bobbin and to put a freshly Betfred your bobbin in your bobbin casing you’re going to remove the cover plate. With basically it’s got the little thing you’re just going to lift the role up that lap and it’ll snap right out.

Then you’re going to pull the little hinge to metal piece out and you want to pull it out all the way so that your bobbin doesn’t fall out of the bobbin casing as pulling out because then it would just get down there it’s pay to the pot so in a way you’d put that down set that down to the side take a fresh bobbin and you are going to take your thread put it on a spool where it pulls it around to the backside of this thread guide and pulls it through. 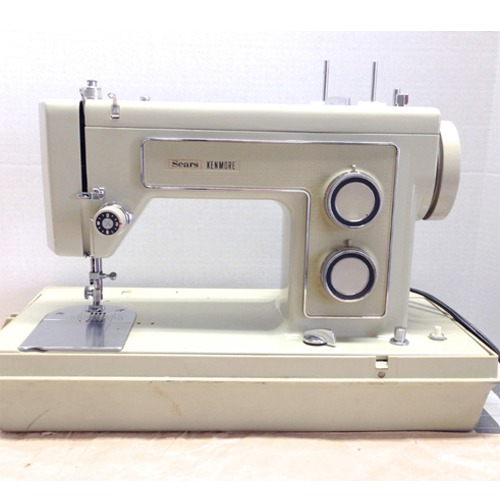 So now that you have that all set, you’ll basically be going to just hold this top thread here so that it doesn’t get wound in the bobbin and start just lightly pushing the pedal you don’t really need to go really fast and because basically if you do, if you’re going like full-speed trying to wind this Bob and this single just like jiggle and fall off, there’s really just no need for it so you just push down on the pedal a little bit and then once it starts going you just, click that into place and you’ll see that it’s going to line the bobbin.

So you’ve gone ahead and you’ve cut that top thread off and have the bobbin so that the thread is basically coming around this way and it’s pulling out here to the right. 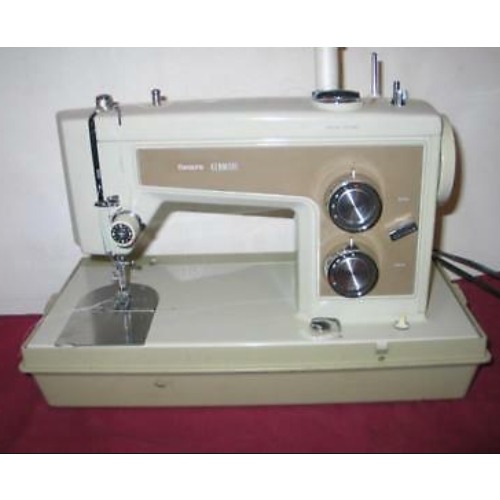 This machine is able to sew leather and Christmas trees and ducks on stuff you know so it’s one of these machines it’s great for beginners in place you can’t really break it. You know aside from using it a lot and just forgetting to oil it even if you did do that you’re like oh my gosh my machine is totally jammed all it does is take a little bit more a little bit of oiling and like some grease and lubricant on the UM on the gears that have the teeth and that should get it back up and running again unless you totally blew the motor and then you would have to cause you’d have to get that fixed but obviously if the motor starts you know smoking when you’re using the machine you know you’re doing something wrong and you should stop but. It’s a pretty much indestructible if you’re just using common sense and using the machine it’s simple it’s straightforward it’s easy to follow and then for the experience so or you’re going to like it because it does do like leather it does free motion and it has a double-needle so it’s just a great machine. It’s also portable so I, mean you can take it wherever you need to go and it’s one of these machines, it’s just going to last you forever.