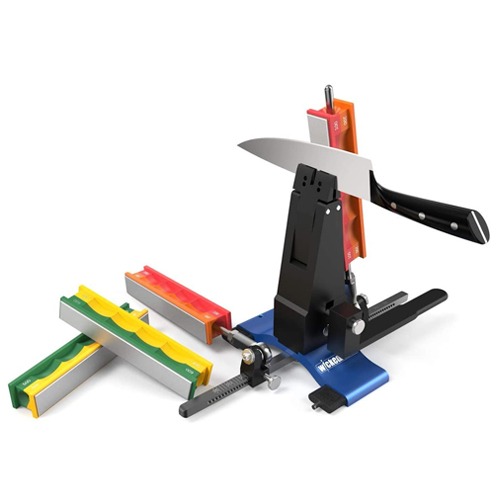 The kit also comes with a template if you want to make a base of your own and this base is just held on here with some Allen head machine screws and it’s very firm on there so you do need a base for it to work but they’ve got a lot of options to choose from.  Some of the extra items in this kit are the 800 and 1000 grit diamond stones for a little bit finer sharp.

Why Wicked Edge WE 130 Knife Sharpener?

The 5 micron and 3.5-micron diamond paste leather strops are for putting a really nice finish on pocket knives. This device elevates the knife in the sharpener to allow you to get to that low angle bevel so that’s kind of a necessity, unless reprofile those knives but that’s a good option to have the metal arms that the Diamond stones ride on.

They’re really easy they just twist into holders and you twist that into both sides, being able to take these off when you’re done makes it easier to store the device.

The wicked edge comes with the tools you need there are two Allen keys. There’s one larger one that is used to tighten the screws that hold the sharpener to the base and the smaller one on this site is used here for micro-adjustments on your blade angle.

After you’ve set it with the main adjustments on the rails here the wicked edge 130, the model allows you to select your bevel angles on one-degree increments everywhere between 13 degrees and 35, degrees just by loosening this screw and then sliding the rail and then tightening it back up wherever you want to stop.

There are two sets of holes and you’ll use the key to put it in. To sharpen a chef’s knife which is fairly wide put the set of pins in the lower set of holes and line that up where that’s touching where the spine of the knife is touching both of those pins and then pull the arm down to lock the blade into place.

If you want to sharpen something like a pocket knife with a thinner blade you should start in the upper set of holes to get the blade elevated a little bit more so you wouldn’t have to worry about the stones hitting anywhere other than on the blade.

The next thing to do to get started sharpening is loading our diamond stones up onto the rails so these just slide on and you’ll slide them on both sides and you’ll orient the stones to which side you won’t own the knife.

To start out with 200 grit diamond stone here the 100 grits a little coarse for the knife it doesn’t need to be ground that heavily so that’s how you would position that you also already know that you’re going to sharpen the knife at a 15-degree bevel angle so position the rails at the 15 degrees mark and don’t be worried about precision and perfect angle bevels on this knife.

Angle gauge on another sharpens now that you have the knife mounted and your stone selected. Use the 200 grit and just use motion on both sides.

You gonna do that until you feel the knife getting smoother with this stone. You can feel it as you go when you first start with like the 200 grainstone or 200 gritstone you can feel it rubbing up against that and you can feel how rough it is but as you go it smoothes out and then just having a look.

You don’t have to force this by pushing too hard you just want to let the weight of the stone there’s a job for you and once that one becomes smooth you want to have a look at it. Sometimes you can see it you can see the grain you can see the grind shape and depth of the stone but when it’s starting to feel smooth it’s time for you to switch up so you gonna ready to switch it up and go to the 400 grit.

Switch 400 / 600 grit stones and you’re gonna do the same thing you’re just going to keep going until you feel it smoothing out and it’s going very quickly on this when it’s not taking much at all.

You can use a magnifying glass so you can see a little better. After a couple of minutes, you’ll notice that the knife is looking nice and it’s developing a really really nice edge. With the 600 grit stones, you’ll wipe that down and have a look at that. It’ll feel really smooth really nice and it will have a really nice sharp edge on it.

Our Verdict: If you are looking forward to sharpening your home tools, the wicked edge can be really helpful for you and for anyone loving kitchen works.