Zoeller Sump Pumps are known for their reliable nature and their ruggedness. Zoeller sump pumps have numerous features that help set them apart from others in the market. First and foremost, the company’s pumps are powder coated with epoxy to make them corrosion and rust-resistant.

Additionally, the pump shells are made with cast iron, making them extremely durable. Furthermore, cast iron is used to make the motor, base, pumping house, and switch case increasing the unit’s durability

Other companies use sheet metal in sump pumps, Zoeller, increasing the risk of corrosion. Due to constant contact with water, there is a high risk of corroding. Similarly, stainless steel screws, arms, and handles are used which further decreases the risk of rust or corrosion.

Zoeller M98 and Zoeller M53 Sump Pumps are one of the best Zoeller pumps out there. This page will help you understand each pump with their overviews, pros and cons, and the comparison of its features.

The information below is compiled from multiple Zoeller m98 reviews also Zoeller m53 reviews. Zoeller sump pump m53 specs and Zoeller m98 are also given below. 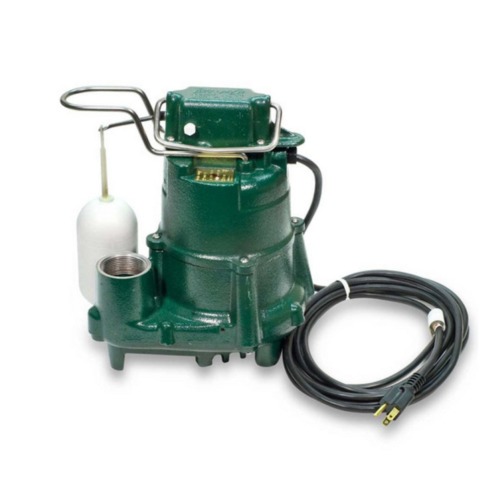 The Zoeller M98-0001, also known as Zoeller M98 sump pump is an automatic submersible type sump pump, it is designed for sewage(effluent) and dewatering work in septic tanks, low-pressure pipe systems, sump pits and other work environments similar to that given above.

Zoeller 1/2 hp sump pump motor which runs at 1725 RPM. It has a max flow rate of 4,320 gallons per hour and is 12 inches tall,10-1/8 inches wide and 8 inches deep. The warranty featured with this unit is a 1-year warranty from installation or 18 months warranty from the manufacturing date.

The M98 is a perfect example of ruggedness and efficiency intermixed to make a pump made for extreme work. Both motor and the pump are encased in an oil-filled cast iron housing which is hermetically sealed for heavy-duty work. All the other parts like the handle, arm, etc… are made of corrosion-proof stainless steel.

The polypropylene vertical float switch, which provides a 6-inch float range is one of the best features of this pump. This directly leads to more water being pumped per cycle.

It is a great one-time investment, just set it up once and let it do its magic. 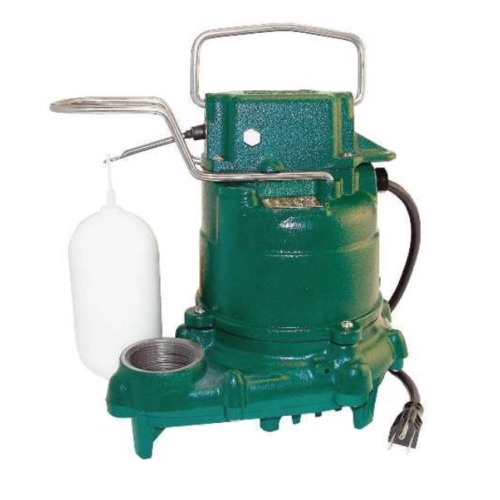 The Zoeller 53-0001, also known as Zoeller M53 sump pump is an automatic submersible type sump pump, it is designed for sewage(effluent) and sump work in sump pits having at least 15-inch diameter. It consists of a single-phase 1/3 HP motor, and has a max flow rate of 2,580 gallons per hour, and is 7.8 inches tall,10.5 inches wide, and 10.5 inches deep.

The warranty featured with this unit is a 3-year warranty from the manufacturing date. It has a vertical pump switch and the current drawn is between 4.8 and 9.7 amps and runs on 115 volts.

The Zoeller M53 is an economical pump by Zoeller Pumps, it has a less complex assembly than other pumps in the market. Cast iron covers the whole structure of the motor, the cast iron is coated with dried epoxy for corrosion resistance. All the other parts like the handle, arm, etc… are made of corrosion-proof stainless steel.

Zoeller m53 Sump Pump is the best economic and easy to install sump pump out there.

Zoeller M53 and Zoeller M98 are one of the most famous submersibles by Zoeller Pumps. As both the Zoeller sump pumps are made from the same manufacturer they have various similarities but subtle differences

Their similarities lie in the fact that both have cast iron housing, which is a powder-coated epoxy finish which gives it good corrosion resistance. No sheet metal parts are used to prevent rust and corrosion. The castings are made of class 25-30 cast iron. The shaft seal is made of carbon and ceramic.

The Zoeller sump pump switch type is a float operated 2 poles mechanical switch. The maximum dewatering and effluent are 54 C. There are no screens that prevent a clog.

The seal assembly, screws, guard, arm, handle all are made of stainless steel. The motor has a permanent split capacitor, which is oil-filed and hermetically-sealed. They also have automatic reset thermal overload protection.

Both the pumps by Zoeller are good at what they are supposed to do. For someone who needs a powerful and quiet pump, M98 is the better option, but he will have to fork out more money has it is much costlier than M53.

For someone who has a low budget but needs a durable and reliable pump then M53 should be your choice.

Under normal service conditions, we feel that the unit is designed for a 7–10-year service life. But during this period, the pump may require periodic servicing.

The average home with an above-average water table will most likely require a 1/2 HP sump pump. This sized sump pumps about 35 to 40 percent more water than 1/3 HP sump pumps do. If water is higher than usual, a 1/3 HP can handle a higher vertical lift when discharging water.

Is Wayne or Zoeller better?

What sump pump lasts the longest?

Pedestal sump pumps have a particularly long lifespan because the motor is held up on a pedestal above the water.

Should sump pump sit on bricks?

Ensure your sump pump doesn’t sit on debris such as silt or gravel, which could be sucked up into the pump, ruining the motor. Instead, place it on steady, flat bricks.